Hosanna to the Son of David!  Blessed is the one who comes in the name of the Lord!
Hosanna in the highest heaven!

David and Sarah reached out after Palm Sunday worship yesterday, with remembrance of baking bread with their sons during First Communion classes.  They recalled that we had shared a recipe for communion bread at that class and requested a copy so that they could bake bread as a family to share during live streamed worship in the weeks ahead.

They also suggested that we share the recipe with the Trinity congregation.  Click here to see the recipe.

At the end of their email, they included this delightful image of their sons Ryan, Ethan and Logan holding their ‘palms.’  I replied with the request to share that photo with the people of Trinity. They agreed to that sharing and additionally shared the image below of the whole family’s ‘palms.’ 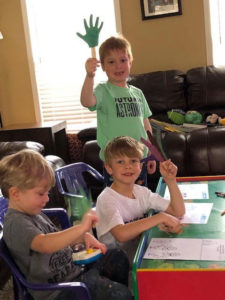 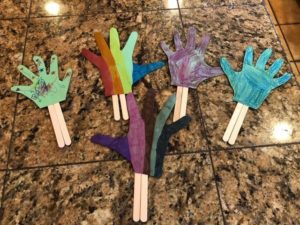 As Palm Sunday unfolded on the east side of Grand Rapids, the people of Trinity arrived from early morning to midafternoon to pick up palm branches outside the lower west entry doors.  Some waved through the church office windows as they stopped by and others raised their palms in procession as they returned to their cars. Still others colored in the palm outline pages sent out by our Sunday School staff this past week and lifted them in worship with Pastor Dan during the Children’s Time and the Blessing of the Palms.  In our separation, we were joined together in the symbolic act of palm procession in worship and we marked the beginning of Holy Week.

The procession with palms would have been familiar to the people of Jerusalem as Jesus entered with his disciples.  In the ancient Near East, it was customary to cover in some way the dusty path of someone thought worthy of highest honor. The Hebrew scriptures (2 Kings 9:13) reported that Jehu, son of Jehoshaphat, was treated in this way as the people spread their cloaks on his path.

In the culture of the Roman Empire, which strongly influenced early Christianity, the palm branch was a symbol of triumph and victory. For contemporary Roman observers, the palm procession welcoming Jesus into Jerusalem would have evoked the Roman triumph after conquest, when the triumphator laid down his arms and wore the toga, the civilian garment of peace that might be adorned with emblems of the palm.

The Gospels reported that people gave Jesus the high honor of such a procession as he entered Jerusalem with the gospel writer John describing the fronds of palm that we lift high in our Palm Sunday celebrations. The palm was later used as a symbol of Christian martyrs and their spiritual triumph over death.  In Revelation 7:9, the white-clad saints stand before the throne and Lamb holding palm branches.  The Christian triumph evolved with a different meaning than the one bestowed on the Roman triumphator, with a triumph over death and darkness transcending the political triumph of Roman military heroes.

For we 21st century followers of Jesus gathered in worship, there is little time to bask in Jesus’ triumphant procession into the city.  Before our shouts of “Hosanna” have had time to echo in the sanctuaries of our time, we are entering the story of Jesus’ Passion, the arrest, trial, humiliation and crucifixion of our Lord.  Now, on Monday of Holy Week, we prepare to journey to the foot of the cross.

Join us in live streaming of “virtual worship” in this Holy Week: 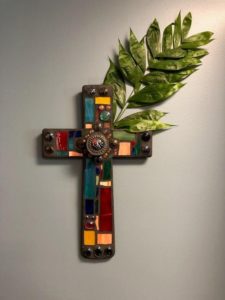 on my office wall at the church