Remembering St. Nicholas, and a call to care for the amazing world in which we live

First, a liturgical calendar note: in worship yesterday, we marked the Second Sunday of Advent with a focus on John the Baptist and his forebears in the faith.  December 6 was also the feast day of St. Nicholas, a fourth-century bishop from Myra, in what is now Turkey; Nicholas is the patron saint of children and sailors, renowned for his generosity. 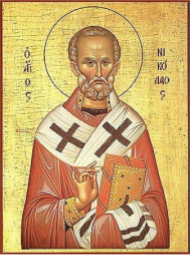 In many parts of the world, on the evening of December 5, children put their shoes just outside their houses’ front doors and during the night, it is said, St. Nicholas fills the shoes with presents such as sweets, chocolate coins, fruit, and nuts, to be enjoyed the next day. The figure of Santa Claus developed out of the tradition of St. Nicholas and the custom of hanging stockings, perhaps, is in cozy homage to the placement of shoes outside.

A belated Happy St. Nicholas Day to all.

December 6 was also the birthday of poet Alfred Joyce Kilmer, born in 1886. Kilmer penned the famous poem, “Trees,” which begins, “I think that I shall never see / A poem lovely as a tree” and ends this way: “Poems are made by fools like me, / But only God can make a tree.”

I think that I shall never see

A poem lovely as a tree.

A tree whose hungry mouth is prest

Against the earth’s sweet flowing breast;

A tree that looks at God all day,

And lifts her leafy arms to pray;

A tree that may in Summer wear

A nest of robins in her hair;

Upon whose bosom snow has lain;

Who intimately lives with rain.

But only God can make a tree. 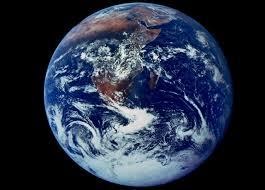 One more note in our daily almanac:  today, December 7, is the day in 1972 that Apollo 17 astronauts took the famous “Blue Marble” photograph of the Earth. It was one of the first clear images of the whole Earth, since the sun was directly behind the camera, and so the entire face of the planet was lit up in brilliant blue, white, brown, and green. The photograph quickly became a symbol of the emerging environmental movement. The astronauts were 28,000 miles away when they took the shot; it was the last time human beings were that far away from the Earth.

In 1948, astronomer Fred Hoyle put it this way: “Once a photograph of the Earth, taken from the outside, is available — once the sheer isolation of the Earth becomes plain — a new idea as powerful as any in history will be let loose.” In this time of climate crisis, such images may again become emblems of just how precious, and how fragile, our home truly is.

Voyager I had completed its 1990 mission.  It was on the way out of the solar system when Ground Control instructed it to make a U-turn and photograph each planet it had passed.  In some of the photos, a pale blue dot appeared.

In 1994, Carl Sagan featured that distant dot in a now-famous address at Cornell University:

From this distant vantage point, the Earth might not seem of any particular interest. But for us, it’s different. Consider again that dot. That’s here, that’s home, that’s us. On it everyone you love, everyone you know, everyone you ever heard of, every human being who ever was, lived out their lives. The aggregate of our joy and suffering, thousands of confident religions, ideologies, and economic doctrines, every hunter and forager, every hero and coward, every creator and destroyer of civilization, every king and peasant, every young couple in love, every mother and father, hopeful child, inventor and explorer, every teacher of morals, every corrupt politician, every “superstar,” every “supreme leader,” every saint and sinner in the history of our species lived there—on the mote of dust suspended in a sunbeam. 1 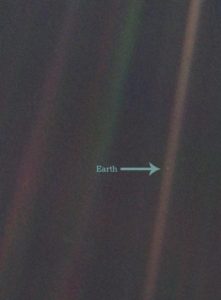 Wendell Berry once wrote, “The earth is what we all have in common.”  And someone else once said, “Time spent among trees is never time wasted.”  As we ponder the beauty of trees and, on a global scale, this amazing planet upon which we reside, some have wondered aloud in recent months if the energy with which we as a human species have wrestled with the COVID-19 pandemic could be translated into a “care of the earth” initiative in our near future, when we have climbed out of the depth of this health emergency.  It most certainly appears that our planet’s health is also at risk even as we proceed through this most challenging public health crisis in a century.  It may be in cosmic reality a “pale blue dot,” but this planet is truly a wonder, manifest to us in its vast oceans, deserts, plains and forestlands, but also in the significance of a single tree.  Can this world’s great scientists be charged by a global community to lead us to a vaccine, so to speak, to address our planet’s health emergency?  Have we as people of faith have hearts to be good and persistent stewards of creation, protectors of trees, forestlands and this planet of ours?

Some might not be able to agree that the climate crisis is real, any more than the reality of this coronavirus that has so much of our attention.  Others will say that the health of a planet is too large a topic for our meaningful action.   The anthropologist Margaret Mead offered this reality check to address that critique: “Never doubt that a small group of thoughtful, committed citizens can change the world; indeed, it is the only thing that ever has.”

On this anniversary of the Apollo 17 photograph of our beautiful “blue marble,” I invite you to join me in praying over the possibility of renewed care for creation, as individuals, as a faith community, and as a global village.  One way we could redeem 2020, a year that many of us would just as gladly discard entirely, would be to emerge from the COVID pandemic with new hearts to care for our planet and all its residents.  Since the beginning we have a God who would call us to join our Creator as stewards of creation.  It would be truly transformative to bring the best of our humanity to the care of the earth; with the same passion we have for securing a coronavirus vaccine.  It may be no more than a “pale blue dot,” but this “blue marble” is most worthy of our undivided attention.

The earth is the LORD’s and all that is in it,
the world, and those who live in it;
for he has founded it on the seas,
and established it on the rivers.

Friends in Christ, let us be those who accept our role as stewards of this good creation.  As Wendell Berry wrote, “The earth is what we all have in common.”