Little children, let us love, not in word or speech, but in truth and action. 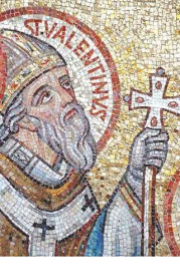 This Sunday marks the celebration of Valentinus of Rome; St. Valentine we call him.  The patron saint of love and marriage, he was also known as a healer and comforter of the sick.

Before plans to go out to dinner (remember going out to dinner?), before Hallmark cards, before long-stemmed roses delivered to your door or your desk, before heart-shaped boxes of chocolates with embossed “flavor maps” — there was St. Valentine. Actually, there may have been two. The history’s not clear and includes legends about an early Christian priest (perhaps a bishop) who was possibly martyred for surreptitiously helping Christians in the military to wed. Emperor Claudius II forbid young soldiers from marrying in fear that it would distract them from battle.  St. Valentine went against the emperor’s order and married couples in secret.  The emperor had him executed on February 14 in the year 270 at the age of 44.  That’s one version.

Another legend suggest that St. Valentine helped fellow Christians incarcerated in the harsh Roman prisons.  A prisoner himself, Father Valentinus told his jailer Asterius how Christ leads pagans out of the shadows of darkness and into the light of truth and salvation.  Asterius replied that if he could heal his foster daughter from blindness, he would convert.  Father Valentinus reportedly covered the girl’s eyes with his hands and prayed, “Lord Jesus Christ, enlighten your handmaid, because you are God, the True Light.” The child regained her sight, and Asterius and his family were baptized. When the emperor heard the news, he ordered them all to be executed.

After healing the prison guard’s foster daughter from blindness, he famously wrote her a letter and signed it, “Your Valentine.”  One way of marking this version of the Valentine legend is to mark the holiday/holy day by sending cards to prisoners.

Despite the rich stories of his life, so uncertain are the details about the legends of St. Valentine that in 1969 the Roman Catholic Church officially discontinued the liturgical veneration of St. Valentine, though he’s still on the list of recognized saints.

The Valentine’s Day holiday lives on. It turns out that Chaucer may be the reason why: the late-medieval poet penned “Parliament of Foules” sometime around 1375, including a link, embellished by more than a little poetic license, between courtly love and the St. Valentine’s feast day. February 14, Chaucer wrote, is the day birds come together to find a mate: “For this was sent on Seynt Valentyne’s day / Whan every foul cometh ther to choose his mate.” As the poem’s fame spread, so did the day’s association with affection, and not just between the birds.

But however fanciful these various legends may be, there’s a deeper wisdom beneath the whimsy. My friends at the Salt Project in Indianapolis recently offered a brief theology of Valentine’s Day.  They cited that for centuries in Christian thought, the most prestigious book in the Bible, the so-called “graduate school” of Christian spirituality, wasn’t Matthew, Mark, Luke, or John, the Book of Genesis, or the Psalms. It was the Song of Songs, an ancient (and pretty racy) romantic poem about love in a world fraught with danger. Over the centuries, the poem was interpreted as an unsurpassed figurative portrait of the love between God and God’s people.

Not that God’s love for us is sexual; rather, the idea is that the intensity, intimacy, and delight of sexual love can be a kind of window, a sacramental parable, for understanding God’s love. Divine love is tender and kind, immersive and ecstatic, full of longing and delight. It’s vulnerable, beautiful, gentle, and strong.

So this Valentine’s Day, think of all the love in your life — the love you feel and the love you witness, the love you remember and the love you long for, even the love among the birds of the air, as a glimpse of God’s care for all creation. And if you’re especially perceptive, you can glimpse divine love even in places as ordinary as a meal shared, a little greeting card, an arrangement of flowers, or a “flavor map” embossed on a heart-shaped lid.

Perhaps if we have eyes to see and ears to hear, the truth about God’s love is that it’s all around us, the Song of all songs, the Symphony of all symphonies, echoing everywhere.

My sisters and brothers in Christ, Happy Valentine’s Day!