Tikkun Olam, repairing the broken world, and an invitation to next Sunday’s Annual Meeting 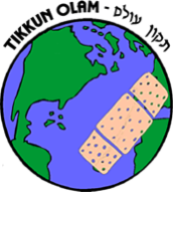 It was a phrase that came up often during our interfaith tour of Israel three years ago.  The rabbis in our tour group reminded their fellow Christian and Muslim sojourners of the Hebrew phrase, tikkun olam, which translates “repairing the world.”  Found originally in the 3rd century rabbinic writing called the Mishnah, tikkun olam  evokes the calling of humanity, made in the image of God, to take on the reparation of the world through social action and the pursuit of social justice, God’s intent in advocating for the disadvantaged.  Humanity has a responsibility to change, improve and fix the world in which we live, in society and in the mending of creation in the care of the earth itself.  Jews know this calling through tzedakah (justice and righteousness) and g’milut hasadim (acts of loving-kindness).

As we traveled through the Holy Land, we encountered contexts again and again where the urgency of tikkun olam was part of our dialogue.  We met grassroots activists who were organizing small initiatives to strengthen dialogue and cooperative endeavors between Muslims and Jews.  We visited sites where Israel and its neighboring nations had gone to war, with vast areas still fenced off because of active minefields that had not yet been remediated.  We viewed sections of the 400-mile Separation Barrier, viewed by many Israelis as a key security barrier and by many Palestinians as a symbol of racial segregation, an apartheid wall.  As we made our way through the Old City of Jerusalem, we passed through security checkpoints that sought to protect holy sites within the various quarters of the segregated holy city.  We toured in deep and reverent passage Yad Vashem, the Holocaust Museum in Jerusalem.  We learned of the diminishing of the vast Dead Sea, where water levels are dropping by an average of three feet per year due to evaporation.  Issues of climate change were often discussed by the residents of Israel, not only as the great salt sea disappears, but also in a nation that prides itself in growing much of its own produce.  Changing climate meant that the means of agricultural production were more and more challenging in a nation with limited arable land.  Our Holy Land pilgrimage included our persistent reflection on tikkun olam, repairing, mending God’s world.

Repairing, mending the world is on my mind after a profoundly difficult week in our nation’s capital and in our national dialogue.  Our nation could use a major dose of justice seeking, righteousness and lovingkindness, the ways of tikkun olam, in our shared response to the societal and political division of our time.

The day after the storming of the U. S, Capitol last week, the Kaufman Interfaith Institute shared a three-minute video profiling Rabbi Art Green, a professor at Hebrew College in Boston, sharing his take on tikkun olam in the context of Kaufman’s “Year of Interfaith Healing” in 2021.  Although the video had been likely been scheduled to be shared before the events of the prior day in Washington D.C., the timing was significant.  In the video, Rabbi Green spoke of the consciousness of exile experienced by Jews through the centuries and that one day they would know restoration.  Exile and restoration are concepts at the heart of Jewish religious mentality and working to bring about the end of exile is a primary objective of tikkun olam, repairing the world.  Enacting the goodness of God’s intent, living well with other people, doing acts of human kindness, bringing light and betterment to the world – all these actions evoke the tikkun olam directive that Rabbi Green described on the journey from exile to restoration.

I have used the concept of ‘exile’ to describe the long separation we have experienced in the faith community during these last ten months of pandemic.  But this day the exile seems deeper.  Our separation is vivid in the lack of dialogue in our long political struggle and the violence of recent days.  We are a deeply broken people and the need for restoration to some semblance of our God’s intent for God’s people living together in the world evokes the cries of the ancient prophets for a people in exile.  They cried, “How long, Lord?”   How long will our exile continue?

I pray that you, my sisters and brother in Christ, will join me in seeking to repair the world by simple acts of  justice, righteousness and lovingkindness, by enacting the goodness of God’s intent, living well with other people, doing acts of human kindness, bringing light and betterment to the world in this challenging time.  Created in the image of God, we must do better . . .

Annual Meeting of the Congregation on Sunday, January 17 at noon via Zoom

The work of the Annual Meeting includes the reception of reports from all the congregation’s ministries, the election of Council members, Synod Assembly representatives and Nominating Committee members, and the adoption of an operating budget for the new fiscal year which begins on February 1. The Annual Meeting will be a meeting in a Zoom format on January 17 at noon – your Zoom invitation follows:

Access the Annual Meeting by following this Zoom link:

The 2020 Annual Report is now available electronically HERE and hard copies will be available for pickup in the church office in the days ahead.  Please review the agenda, biographical profiles of those nominated for leadership, the reports of the congregation and the proposed 2021 budget. Plan now to join us for the Annual Meeting via Zoom on Sunday, January 17 at noon.

Blessings to you, O people of Trinity, as we seek to begin a new year with the mission of joining with one another in the repair of the world, the mending of creation.  May you be safe, may you be well, and may you be held in love.