from Strength to Love by Martin Luther King, Jr. 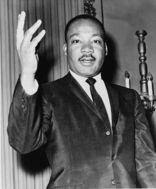 Today is Martin Luther King Jr. Day, observed annually on the third Monday of January, honoring the life and work of the Rev. Dr. Martin Luther King Jr. The day became a national holiday in 1986, and is often observed with service projects, a public concert, and/or a prayer breakfast in years not characterized by pandemic separation.

Martin Luther King Jr. was born in Atlanta, Georgia, on January 15, 1929. A fourth-generation Baptist preacher, King was a 25-year-old pastor in Montgomery, Alabama, recently married and with a newborn daughter at home, when a local woman named Rosa Parks was arrested for refusing to give up her bus seat to a white man. Though Parks would later be described as “an old woman tired after a long day of work,” in fact she was a 42-year-old NAACP leader, activist, and organizer. As she later put it, “No, the only ‘tired’ I was, was tired of giving in.”

The Women’s Political Council, led by Jo Ann Robinson, had been thinking about organizing a bus boycott, and since Parks was so widely respected in the community, they decided to rally around her case. Four days after the arrest, Robinson and her colleagues formed the Montgomery Improvement Association to oversee and coordinate the boycott. It was Robinson who nominated her church’s young preacher, Martin Luther King Jr., as a potential leader for the effort.

The Montgomery Bus Boycott was originally conceived to be brief, but in the end, it lasted more than a year. Participants faced all kinds of resistance, including harassment, intimidation, and terrorism: many homes and churches, including King’s parsonage, were bombed by white supremacists. In 1956, the United States Supreme Court ruled that segregated busing was unconstitutional. The boycott vaulted King to the status of a national civil rights leader; he was 27 years old.

In 1963, at the age of 34, King delivered what is arguably the most famous speech of the twentieth century at the “March on Washington for Jobs and Freedom.” He stirringly spoke of having “a dream” for America, but the heart of the speech was about how African American civil rights were being systematically denied, from police brutality to housing discrimination to segregation. And in 1967, King linked the civil rights movement to the peace movement, arguing that the Vietnam War disproportionately burdened soldiers who were often poor young men of color; that it drained resources away from important domestic social programs; and that it was an unjust war in any case, largely targeting poor people in Vietnam. He began organizing a “Poor People’s Campaign” to combat economic inequality in the United States. 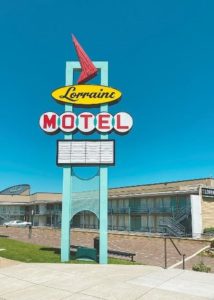 On April 4, 1968, King was assassinated just outside his Memphis motel room, having travelled to Memphis to lead a march in solidarity with striking garbage workers.  The National Civil Rights Museum in Memphis, Tennessee, is built into the site of the Lorraine Motel where King was gunned down on the motel balcony.  Rebecca and I visited this important landmark in Memphis a few years ago – I commend the National Civil Rights Museum to any who travel to Memphis for business or pleasure.  It is a significant and moving national treasure.

(I am indebted to the Salt Project for much of the brief synopsis of Dr. King’s life above.)

As we mark the King holiday in 2021, we do so during a period of upheaval that desperately needs our standing for light and love in the face of darkness and hate.  We are bound to one another in this human pilgrimage, as Dr. King indicated in another of his writings:

“This is the inter-related structure of reality.”

from Letter from Birmingham Jail by Martin Luther King, Jr.

We are bound together in a journey of bearing light and love to our broken world.

One last offering on this Martin Luther King, Jr. Day, the gift of little poem by Gwendolyn Brooks:

A man went forth with gifts.

He was a prose poem.
He was a tragic grace.
He was a warm music.

He tried to heal the vivid volcanoes.
His ashes are
reading the world.

His Dream still wishes to anoint
the barricades of faith and of control.

His word still burns the center of the sun
above the thousands and the
hundred thousands.

The word was Justice. It was spoken.

Blessings to you, O people of Trinity, with whom I am bound “in a single garment of destiny.”  May you be safe, may you be well, and may you be held in love.