Please know the invitation to join the people of Trinity in Lenten Midweek Worship, the service of Compline, Prayer at the Close of the Day.  You can access the recording of this Wednesday’s service here:

The March 17 service is a recording available on Trinity’s YouTube channel and can be accessed at your convenience for a midweek worship experience during Lent of 2021.  Larry Biser offers meditative piano music to open and close the liturgy and Pastor Dan offers brief homilies in different community settings over the course of this five-week worship series.  I have the privilege of serving as liturgist for our offerings of Compline in 2021.

Come, O people of God, come and let us worship. 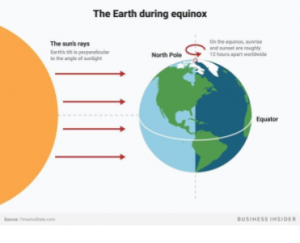 Saturday, March 20 is the first day of spring this year, when the vernal equinox occurs in the Northern Hemisphere. As the Earth orbits the sun, sometimes its axis is tilted toward the sun (summer in the Northern Hemisphere) and sometimes away from it (winter). Today, it’s neither; the North Pole and the South Pole are equidistant from the sun. The term “equinox” is from the Latin for “equal” (aequus) and “night” (nox), the idea being that today, night and day are as close to equal in length as they will be all year.

In the life of the church it’s Lent, from the old English ‘lencten,’ noting the ‘lengthening’ of days in this season before Easter.  The new light of the resurrection is at the heart of our story, the story of the empty tomb, and that resurrection promise is ours as the people who know God in Christ.

A little Madness in the Spring
Is wholesome even for the King,
But God be with the Clown —
Who ponders this tremendous scene —
This whole Experiment of Green —
As if it were his own!

Today we mark another ‘experiment of green’ as people make their cultural observance of St. Patrick’s Day.  I remember from my years in Chicago the greening of the Chicago River; Mayor Lightfoot said she wasn’t going to dye the river in this pandemic year’s observance, but last weekend she authorized the color change.  At Jimmy’s in Hyde Park on Chicago’s southside the beer was served green on St. Patrick’s Day, and I learned over time that green beer was a St. Patrick’s Day norm in many communities.  When our sons were young, we added a bit of green food coloring to the milk for St. Patrick’s Day breakfast cereal.  It seemed like the thing to do.

It does need to be noted that St Patrick was indeed a historical figure in the unfolding story of Christianity’s spread across Europe many centuries ago.  The lives of the saints are full of stories passed down for generations, stories so polished that the lines between history and legend are blessedly impossible to find. And so, in honor of St. Patrick’s Day this year, three ancient, delightful stories — but first, a little background. 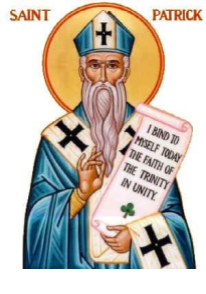 St. Patrick is one of the patron saints of Ireland. He died just over fifteen hundred years ago, reportedly on March 17, and he is closely associated with the growth of Christianity throughout the Emerald Isle, the rise of Celtic styles of Christianity, and of course that famous shamrock (more on that in a bit).

He first encountered Ireland as an enslaved young man. Patrick was born in the Roman imperial province of Britannia (today known as Great Britain), and as a youth he was captured by Irish raiders and forced to serve as a sheep herder. After six years of captivity, he escaped and made his way home — only to return to Ireland years later as a bishop and missionary.

Patrick was an itinerant preacher, and it is said that he carried a walking stick made of ash wood. In his travels between Britannia and Ireland, whenever he would stop to preach, he would plant the stick beside him, upright in the ground. At the English site now called Aspatria (“ash of Patrick”), he preached so patiently, the story goes, that when at last he finished, he couldn’t remove the stick. It had sprouted roots and was already on its way to becoming a tree.  Let the people of Trinity Lutheran Church give thanks for blessedly brief sermons.

In his life as an enslaved sheep herder, St. Patrick was quite familiar with the sheep bell: a simple bell of hammered iron with a small handle on top. As a bishop, that bell continued to have great meaning for him, perhaps because it reminded him of his youth, or of the ringing good news of the gospel, or of his ongoing role as a pastor (from the Latin pastorem, “shepherd”). Whatever the reason, he was laid to rest with one resting on his breast: the dead shepherd, buried with his bell.

Sometime later, the bell was removed from the tomb as a precious relic. And in the eleventh century, artists intricately covered the bell in bronze, gems, and Celtic designs of crosses and birds — not to make the bell appear more holy, it is said, but rather to shield the eyes of onlookers from the brilliant holiness of the iron original. Now on display in Dublin’s National Museum, St. Patrick’s Bell is considered one of Ireland’s signature treasures.

The Christian idea of the Holy Trinity — God’s simultaneous three-ness and oneness as Creator, Christ, and Holy Spirit — has always been a great challenge for preachers to grasp and explain. St. Patrick did it this way: he looked around, and then plucked a shamrock from the ground at his feet. Three leaves, he said, and yet one stem, one life. Add to that the shamrock’s vibrant shade of green, the color of growth and vitality — and while it’s easy to imagine a more technical, lengthy explanation of the Trinity, it’s hard to imagine a better one.

A prayer for St. Patrick’s Day, as we welcome springtime in west Michigan:

God of walking sticks and bells, little shamrocks and big ideas, thank you for Patrick of Ireland. Let us remember him not only for his sake, but most of all for your sake, and for the sake of your good and brilliant green creation, for springtime blossoming all around us. Grant us the patience to trust the work you have given us, so that it might take root, grow, and bloom. Grant us the dignity and clarity of a simple, iron bell, ringing praise to your holy name. Grant us new eyes to see your creation afresh, out on the horizon but also down around our feet, where great mysteries dwell nearby, hidden in the grass. For we are all your sheep, and you, our good shepherd. In Jesus’ name,

I am indebted to the Salt Project in Indianapolis for some of the St. Patrick’s story shared above.  Happy St. Patrick’s Day, O people of Trinity.  I hope that our offerings of Compline on the Wednesdays of Lent in 2021 provide a measure of meaningful devotion on your Lenten journey.