Participants who have viewed Trinity’s live streaming of worship in the last six weeks have taken note of the “The Risen Christ” sculpture that has graced the altar table in Centennial Hall since Easter Sunday.  Several have inquired to learn more about that piece.

The sculptor, H. J. Slider, is one of the co-chairs of the Trinity Arts Committee, which was formed to help our congregation transition into our newly renovated facility after the recent building project.  Furnishing of and installing signage in renovated spaces throughout the church building, acquisition of the “Night Flight” sculpture on the west lawn, and the organizing of exhibits in the new Overlook Gallery featuring the works of Trinity members and other local artists, have all been accomplished as the work of this active committee.  Seeking future art acquisitions for our facility will be part of the ongoing work of the Trinity Arts Committee.

A respected local artist who is retired from the faculty at Aquinas College and serves as an active community curator of Art Prize in Grand Rapids, H.J. initiated a project that evoked her gifts as a sculptor in the months before our facilities renovation began.  With the able support of her husband Steve Johnson, she began to harvest limbs from the ornamental trees in the old outdoor Courtyard area, trees that were destined to be removed as renovation began.  Then, with the support of a few willing carvers, H.J. began to shape Christ figures and angels from the harvested limbs.  Many of the smaller figures were purchased by Trinity members and friends to support a fund which will allow for future art acquisitions.  The trees of the old Courtyard became sculpted art to both remind us of that former garden in the midst of our facility and to endure as keepsakes from a remarkable period of facilities improvement in our history as a congregation. 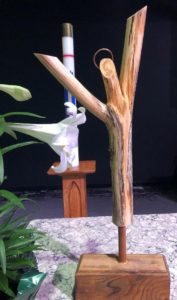 H.J. Slider gifted “The Risen Christ” to Trinity Lutheran Church in July of 2019 and it was installed in a niche in the historic legacy wall outside the narthex in the Overlook Gallery.  This wood and copper Christ figure was created from a burning bush limb harvested from the former outdoor courtyard at Trinity.  Gracing our ‘virtual worship’ altar during this time of live streaming of worship, and looking out upon the new Courtyard fellowship room, “The Risen Christ” will be returned to its niche upstairs in the weeks ahead.  It is a privilege to have one of H. J. Slider’s sculptures onsite at Trinity.

Another American artist, the novelist, poet, environmental activist and farmer philosopher Wendell Berry, who creates in the art of the spoken word, wrote a poem entitled, “Manifesto: The Mad Farmer Liberation Front.”  Calling upon a less consumer driven and more literally ‘grounded’ perspective, the poem concludes with the words, “Practice resurrection.”  Like the sculptor who sees Christ figures and angels in the limbs of an ornamental tree, Berry sees a path of spirituality in doing things every day that “do not compute,” things inspired by the good earth and by life’s relationships, and by such practice, loving the Lord and loving the world:

Love the quick profit, the annual raise,
vacation with pay. Want more
of everything ready-made. Be afraid
to know your neighbors and to die.
And you will have a window in your head.
Not even your future will be a mystery
any more. Your mind will be punched in a card
and shut away in a little drawer.
When they want you to buy something
they will call you. When they want you
to die for profit they will let you know.
So, friends, every day do something
that won’t compute. Love the Lord.
Love the world. Work for nothing.
Take all that you have and be poor.
Love someone who does not deserve it.
Denounce the government and embrace
the flag. Hope to live in that free
republic for which it stands.
Give your approval to all you cannot
understand. Praise ignorance, for what man
has not encountered he has not destroyed.
Ask the questions that have no answers.
Invest in the millennium. Plant sequoias.
Say that your main crop is the forest
that you did not plant,
that you will not live to harvest.
Say that the leaves are harvested
when they have rotted into the mold.
Call that profit. Prophesy such returns.
Put your faith in the two inches of humus
that will build under the trees
every thousand years.
Listen to carrion — put your ear
close, and hear the faint chattering
of the songs that are to come.
Expect the end of the world. Laugh.
Laughter is immeasurable. Be joyful
though you have considered all the facts.
So long as women do not go cheap
for power, please women more than men.
Ask yourself: Will this satisfy
a woman satisfied to bear a child?
Will this disturb the sleep
of a woman near to giving birth?
Go with your love to the fields.
Lie easy in the shade. Rest your head
in her lap. Swear allegiance
to what is nighest your thoughts.
As soon as the generals and the politicos
can predict the motions of your mind,
lose it. Leave it as a sign
to mark the false trail, the way
you didn’t go. Be like the fox
who makes more tracks than necessary,
some in the wrong direction.
Practice resurrection.

Next week we complete the seven weeks of the Easter season, the season of resurrection, and while resurrection is a moment in our liturgical calendar, it’s also a way of living, a kind of practice. Wendell Berry invites us to consider an alternative to what “practicing resurrection” might look like.  To some degree it can be said that Berry has learned from the best – the fox, the leaves, and the soil, among other revolutionaries – about how resurrection is truly practiced.  Love the Lord and love the world.  Practice resurrection.

Thankful for the artists who challenge us to see the world, and the power of resurrection, in new ways, a blessed Wednesday in the sixth week of Easter my friends.