It is good that one should wait silently

for the salvation of the LORD. 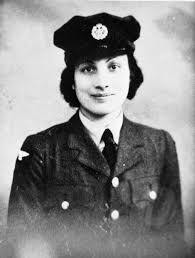 I read an article recently by author Arthur J. Magida entitled “Solitary Refinement.”  Magida had recently completed a biography of Noor Inayat Khan, a Sufi Muslim who lived in Paris and became an agent of Britain’s top-secret Special Operations Executive during World War II.  England’s only radio operator in France in 1943, her role as a spy was a critical but solitary endeavor.  Social distancing was innate to her craft.  After the Germans captured her, Noor tried to escape prison twice and was finally chained in solitary confinement for ten months.

Noor had written before the war that solitude, used well, was a vehicle to apprehend her “true self.”  She also believed that we must descend into darkness “before realization shall come.”  1

Magida’s article, inspired by Noor Inayat Khan’s acceptance of solitude, was written to address the world as we know it in this time of pandemic isolation.  He wrote, “We’re all loners now in this, the largest sensory deprivation experiment in history.  Even extroverts are loners, or should be.  Imposed solitude may be most difficult for them, though that is not to minimize its effect on the rest of us.  They’re alone.  We’re alone.  Our solitude isn’t selective.  It’s as undiscriminating as the virus it’s protecting us from.”  2

Magida went on to describe different experiences of societal solitude.  He cited David Reisman’s sociological work The Lonely Crowd.  Reisman’s poignant study described the loneliness of people who didn’t know how to connect with those around them, a dynamic of living in society, even in crowded society, and not finding connection and community.  And he described Henry David Thoreau’s selective solitude as experienced at his favorite pond near Boston.  Thoreau broke away from society to confront himself, although Magida noted that his mother still did his laundry and he often dined with friends.  Thoreau’s semi-solitary confinement brought him to the conclusion that it was, “wholesome to be alone the greater part of the time.  To be in company, even with the best, is soon wearisome . . .  I never found the companion that was so companionable as solitude.”  3

As Magida noted, ‘good for him.’  The experiences of solitude amid crowded society, or self-selected on Walden Pond, are different than the solitude we know now, in the midst of this COVID-19 pandemic.  Our solitude is imposed, not chosen.  It is mandated, not selected.  Because of the potentially fatal danger that this coronavirus brings, there is a weight and significance in our world that was nowhere near Walden Pond.  The patience, hope and dread that we are experiencing in this pandemic journey would have stumped Reisman and Thoreau, Magida asserts.  An entire planet looking inward would have been beyond their understanding for, as a species, we are not built for this . . .

We are not built for this.  We truly thrive in community and, as a faith family, our separation is a profound challenge.   Even as we hold one another in prayer and reach out via social media, phone, text and the other various electronic platforms that we share, we know the solitude of this pandemic journey to be, at least on some level, grievous.

It is good that one should wait silently

for the salvation of the LORD.

The little pericope from Lamentations reminds us that the experience of solitude and silence do have a dimension of spiritual formation.  Scripture is rich in images of retreating to a place of quiet, of solitude for prayer or for preparation for ministry.  Elijah’s encounter with the presence of God in sheer silence during his cave retreat was powerful in the deep absence of sensory inspiration.  Jesus’ own pattern of going into solitude and silence to be with God in a profound way, praying and listening to him, served as a model for his disciples.  “In the morning, while it was still very dark, he got up and went out to a deserted place, and there he prayed . . .”  (Mark 1:35)  Solitude was an essential part of the rhythm of Jesus’ life, and scripture testifies to Peter, Paul and others in the generation that followed Jesus likewise making retreat into solitude for spiritual centering, vocational enlightenment and the discipline of prayer.

Still, we are not built for this.  The pandemic of 2020 is no spiritual retreat, even if we find times for prayerful solitude.  And unlike the amazing Noor Inayat Khan, we are not prisoners of war.  Our solitude is imposed by the necessity of caring for others, and its long duration is not to our liking.  These are dark times, frightening times, lonely times.  But perhaps, in the spirit of Noor, we can embrace our aloneness not as deprivation, but as a rare lift toward the awareness of self.  That would have appealed to her.  Magida wrote:

“She understood the fortifying, invigorating possibilities of solitude, of ‘sheltering-in-place.’  If she had not emerged from ten months in chains and solitude in a Nazi prison still defiant, she could not have shouted ‘Liberté!’ when executed at Dachau the next day.  Such self-knowledge would have appealed to Henry David Thoreau and to David Reisman, two apostles of cognizance, either in a crowd or far away from it.”  4

The author of Lamentations wrote, “It is good that one should wait silently for the salvation of the LORD.

. . .to sit alone in silence when the LORD has imposed it . . .”  And we are reminded that lament is a genuine form of petition to almighty God, for in our lament we are sometimes most genuinely authentic in our outcry.  Let us seek to redeem even this time, nurturing introspection and prayer, growing in disciplines of the Spirit.  ‘Solitary refinement,’ Magida called it.