Seek the welfare of the city, state and nation, O people of God 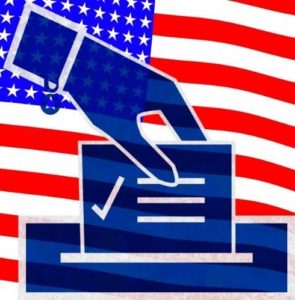 In fifteen days, we will arrive at Election Day in our national journey.  As people of faith, we remember Jesus’ commendation in yesterday’s Gospel from Matthew 22, “Give therefore to the emperor the things that are the emperor’s, and to God the things that are God’s.”  At the heart of that teaching is the recognition that we are made in God’s image, that we are God’s, and that the cross traced on our foreheads in baptism marks us with the cross of Christ forever.  We bear God’s image into the world.  But we are also reminded that we have a duty to citizenship, to paying taxes, to bettering our communities, to voting for leaders of our choosing.  And as people of faith, we are all commended to pray for those who are elected to lead us.

Jesus does not commend us to refrain from our duty to citizenship.

Reinhold Niebuhr was one of the most important theologians of the 20th century.  A leading public intellectual, Niebuhr spoke frequently of the intersection of religion, politics and public policy.  He was a critic of any perception of ‘national innocence,’ a utopian view which he regarded as ineffective in dealing with the reality of his day.  In his 1944 book, The Children of Light and the Children of Darkness, he famously wrote:

(We are reminded that in Niebuhr’s day, ‘man’ was commonly used to express ‘humanity.’)

Niebuhr applied the insights of Augustine and John Calvin to moral and political issues.  His political argument was bound up in the ancient vocabulary of original sin, the constant temptation for the individual to play God.  That self-righteous delusion encourages dividing the world between good (us) and evil (our critics).  The deep polarization that results from that delusion is poignant in our time.  The “us versus them” dynamic is powerfully at work in our social fabric, pitting even friends and family against one another in divisive political discourse.

Our inclination to injustice makes democracy necessary, Niebuhr maintained, and the person of faith is not exempt from the political process in that social analysis.  On the contrary, the citizen is compelled to take his or her place in advancing the democracy.

Our synod bishop, the Rev. Craig Alan Satterlee, wrote in the latest edition of our synod’s monthly newsletter of the privilege and call to seek the welfare of our cities, state and nation from the context of Jeremiah the prophet’s exhortation to the people of Israel in exile in Babylon.  Excerpted here, Bishop Satterlee wrote:

Speaking through the prophet Jeremiah, the Lord God declared, “But seek the welfare of the city where I have sent you into exile, and pray to the Lord on its behalf, for in its welfare you will find your welfare” (29:7). If God would have Israel pray for Babylon, where they were exiled, how much more would God have us pray for the United States of America, where we are privileged to live. The separation of church and state is a doctrine aimed at protecting religion from government interference. It is not an excuse that relieves people of faith from fulfilling our responsibility as citizens. So, as we approach Election Day and move farther into fall toward winter, I ask you to do two things in addition to praying for the welfare of your city, our state, and our nation.

First, to seek the welfare of the city, state, and nation, vote. Make your plan. Vote in a way that is best for you. But vote.

Second, to seek the welfare of the city, sacrifice. I recently saw a documentary on the home front during World War II and was brought up short by the way those Americans sacrificed for the sake of our nation. We refuse to wear masks and keep social distance. We complain that we can’t get into our church buildings, sing songs, and drink coffee . . . We are unwilling or unable to sacrifice.

“Seek the welfare of the city, and pray to the Lord on its behalf, for in its welfare you will find your welfare.” Pray. Vote. Stay home. Keep social distance. Wear a mask. Sacrifice. Please. For Jesus’ sake.

The journey of faith most certainly allows us to contemplate the sacred, to enter into the sanctuary of prayer, to embrace and reflect upon the mysteries of eternity.  But we cannot simply stay on the mountaintop with Jesus, as Peter sought to do in the Transfiguration account.  Jesus bids us walk with him back into the valley, to seek the welfare of the city, to participate in our nation’s systems of governance as citizens and as children of God.  Remember that you are God’s, made in the image of God.  But “give to the emperor the things that are the emperor’s.”  We have a duty to citizenship, to paying taxes, to bettering our communities, to voting for leaders of our choosing.  And as people of faith, we are all commended to pray for those who are elected to lead us.

Let us seek the welfare of our cities, our state and our nation.