Today in 1452, the change of seasons and a possible return to “in person” worship at Trinity on Reformation Sunday

568 years ago today, on September 30, 1452, the first section of the Gutenberg Bible was finished in Mainz, Germany.  Johannes Gutenberg was the youngest son of a wealthy merchant, and his innovations in developing what became the modern printing press, capturing the moves of Medieval calligraphy in separable, movable type, transformed religion, literature, and politics.  Before the printing press, a book like the Bible would take years to produce by hand; Gutenberg’s press made 185 copies of the Bible, about 50 of which still survive today. The consequent printing revolution reshaped human culture, changing forever how (and how far) knowledge was disseminated, democratizing learning, and making new art forms possible.  Known in its day as “the art of multiplying books,” modern printing was catalytic for the European Renaissance, the Scientific Revolution, and the Protestant Reformations. Luther’s call to reform the church would not have had the social media impact in his day without Gutenberg’s printing press. 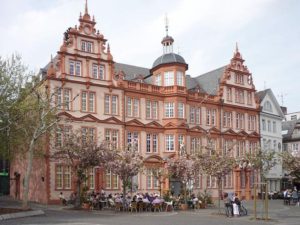 It was in July of 2016 that 26 “Trinity Travelers” began their tour of Luther’s Germany in Mainz.  We visited the Gutenberg Museum in the old part of Mainz, across from the cathedral, where two of the surviving copies of Gutenberg’s Bible are among the acquisitions.  I have a fond memory of Trinity Traveler Vince Schumacher volunteering to physically pull the press to paper at the museum exhibit, the replica of Gutenberg’s printing press, which had been carefully rebuilt according to the 15th and 16th century woodcuts of that amazing device. 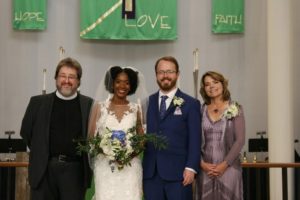 I love autumn in the northern hemisphere.  Growing up in the upper Midwest, I have always been invigorated by autumn’s crisp temperatures, the smell of the woods, the beginning dormancy of growing things and the colors.  I particularly delight in autumns that unfold slowly, with little bursts of surprising warmth and sunshine returning multiple times before winter arrives.  Rebecca and I were married on a spectacular autumn weekend on the south shore of Lake Superior 36 years ago.  Our son John and his bride Monique were likewise married on a beautiful October day last year in the sanctuary of Trinity Lutheran Church in Grand Rapids.  Those celebrations are memorable in part by the beautiful fall weekends that enveloped them and the places where we gathered.

Do you remember gathering in the sanctuary of Trinity Lutheran Church?  It was prior to the first day of spring that we closed Trinity in the face of the COVID-19 pandemic.  The entire seasons of spring and summer passed without “in person” worship in the sanctuary or in Centennial Hall.  None of us anticipated the extent of the pandemic closure; we were still planning for the congregation to be back together for Holy Week and Easter services during those middle weeks of March when we were trying our hand at live streaming of our Sunday worship expression.  Now nearly seven months later, a new season is unfolding.

With this new season, the Congregation Council received the report of Trinity’s Re-Entry Advisory Group on Monday of this week with the recommendation that we begin to lay the groundwork for resuming “in person” worship in a way that cares well for protocols of reasonably safe occupancy with distancing, masks and cleaning.  To accomplish this will require a robust team of “usher greeters” who will implement the physical distancing and contact tracing plans that will be developed in the weeks ahead by a “Return to Worship Coordination Team.”

Many will choose to refrain from returning to worship this fall as we continue to make our way through the COVID-19 pandemic.  Those who return to “in person” worship will do so with limitations based on distancing, the wearing of masks, limited distribution of Holy Communion and a lack of singing.  We will, however, continue to provide the live streaming of the 9:15 a.m. worship service from Centennial Hall in addition to the three “in person” worship services.  We will encourage all our people to make the best choices for their own particular needs related to our gathering of the Trinity community in worship.

Much will need to be accomplished in the next month to actualize our return to “in person” worship on October 25.  The people of Trinity will have opportunities to step up and help make this long-deferred dream a reality.  Watch for your opportunity to sign up and serve.

A new season is dawning in our life together at Trinity.  On Reformation Sunday, a day that evokes our heritage as Lutherans, tied to the social media revolution launched by Johannes Gutenberg 568 years ago today, we will, with an abundance of caution, gather again in Trinity’s places of worship to hear the Word of God and share the sacrament.  Come and let us worship.