Yesterday’s Children’s Christmas Program link, and “The Christmas Star” on the 2020 Winter Solstice – a light on the darkest night . . .

In case you missed yesterday’s Children’s Christmas Program, a virtual gift shared through our live streaming of worship, the link to that 25-minute recording is here:

A star burned in the sky more brightly that all the others; its light was indescribable,

its newness marvelous, and all the other stars, along with the sun and the moon,

formed a chorus around this star, the light of which reached farther than that of any other . . . 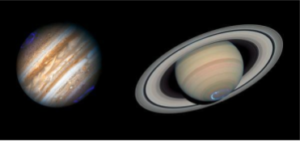 2020 has already brought several firsts for much of the world, but as the year comes to a close, a once-in-a-lifetime sight will appear in the night sky just in time for the arrival of Christmas.  It’s called the “Great Conjunction,” or the moment when Jupiter and Saturn appear at their closest, “a tenth of a degree apart,” according to Chicago’s Adler Planetarium.  (Though the two gas giants will appear to be close, in reality they are hundreds of millions of miles apart.)

This year’s Winter Solstice conjunction has been dubbed the “Christmas star,” because some astronomers have theorized that the “Star of Bethlehem” could have been a rare conjunction involving Jupiter and Saturn.

As with gladness men of old,

Did the guiding star behold,

As with joy they hailed its light,

So most gracious God, may we

Evermore be led to thee.

The event is set to take place on December 21, which also marks the Winter Solstice, bringing the northern hemisphere the shortest amount of daylight and the longest night. Though conjunctions happen roughly every 20 years, this one will be particularly close.  It will be the first Jupiter-Saturn conjunction since 2000, but also the first time such a close conjunction has been observable since 1226, according to EarthSky.

“This will still be quite a striking sight, but you will need to look fast as both planets will set shortly after sunset,” according to NASA’s website.  Those looking to see the star will want to look above the southwestern or western horizon after sunset, experts say.

Don’t worry if you can’t catch it on December 21.  According to the Adler Planetarium, the planets can be seen as early as this Wednesday, December 16, but the “real show” takes place the evenings of December 20-22.

O God, on this day you revealed your Son to the nations by the leading of a star.

Lead us now by faith to know your presence in our lives,

and bring us at last to the full vision of your glory,

through your Son, Jesus Christ our Lord,

who lives and reigns with you and the Holy Spirit,

one God, now and forever.  Amen.

Prayer of the Day for the Day of Epiphany

The symbol of the Christmas Star on the southwest horizon as the darkest night of the year arrives in 2020 is not lost on me.  This has been a year unlike any in my memory.  With the COVID-19 pandemic and the accompanying economic upheaval, with profound political polarization and issues of racial injustice boiling over, with rising experiences of isolation, depression and fatigue, this has been a deeply challenging year on our journey together.  The Winter Solstice in 2020, the longest night of year, will be illuminated by a great conjunction of planetary bodies, a light in the darkness of our long pandemic year.  And we will celebrate the birth of the light of the world a few short days later.

Creator of the stars of night,

O Christ, Redeemer of us all,

We pray that you hear us when we call.

In sorrow that the ancient curse

Should doom to death a universe,

Your own in glorious liberty.

In these latter days of our Advent pilgrimage to the stable in Bethlehem, may we witness to the birth of the light that shines in the darkness, the light of the world.  Born to us is love made manifest to overcome hate, hope incarnate to overcome despair, the life of the world to overcome death itself.  “O God, on this day you revealed your Son to the nations by the leading of a star.  Lead us now by faith to know your presence in our lives, and bring us at last to the full vision of your glory . . .”