Today is International Holocaust Remembrance Day, observed annually on January 27 to commemorate the victims of the World War II genocide.

The United Nations General Assembly designated the day as the International Holocaust Remembrance Day on November 1, 2005. The day marks the end of the Nazi regime and the holocaust, which claimed the lives of six million Jews along with 11 million others.

The ceiling in the Hall of Names at Yad Vashem, 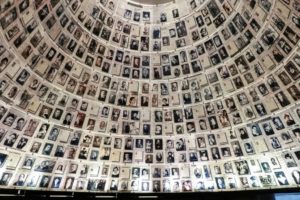 On Saturday, July 15, 1944, Anne Frank made a remarkable entry in her diary.  Anne was a Jew, fifteen years old then and, with her family and others, had been in hiding in an attic room for more than two years.  Three weeks after this entry the hiding place was found, and the Nazis sent all the inhabitants to concentration camps.  Seven months later Anne died in the camp at Bergen-Belsen.  She wrote that day in July:

It’s really a wonder that I haven’t dropped all my ideals, because they seem so absurd and impossible to carry out.  Yet I keep them, because in spite of everything I still believe that people are really good at heart.  I simply can’t build up my hopes on a foundation consisting of confusion, misery, and death.  I see the world gradually being turned into a wilderness.  I hear the ever approaching thunder, which will destroy us too.  I can feel the sufferings of millions and yet, if I look up into the heavens, I think that it will all come right, that this cruelty too will end, and that peace and tranquility will return again.

“For the dead and the living, we must bear witness,” Holocaust survivor Elie Wiesel wrote.  “I swore never to be silent whenever and wherever human beings endure suffering and humiliation. We must take sides. Neutrality helps the oppressor, never the victim. Silence encourages the tormentor, never the tormented.”

Finally, on this International Holocaust Remembrance Day, the words of President Joe Biden, released today by the White House to commemorate this day in 2021:

Today, we join together with people from nations around the world to commemorate International Holocaust Remembrance Day by remembering the 6 million Jews, as well as the Roma and Sinti, Slavs, disabled persons, LGBTQ+ individuals, and many others, who were murdered by the Nazis and their collaborators during the Shoah. We must never forget the truth of what happened across Europe or brush aside the horrors inflicted on our fellow humans because of the doctrines of hatred and division.

I first learned about the horrors of the Holocaust listening to my father at the dinner table. The passion he felt that we should have done more to prevent the Nazi campaign of systematic mass murder has stayed with me my entire life. It’s why I took my children to visit Dachau in Germany, and why I hope to do the same for each of my grandchildren — so they too would see for themselves the millions of futures stolen away by unchecked hatred and understand in their bones what can happen when people turn their heads and fail to act.

We must pass the history of the Holocaust on to our grandchildren and their grandchildren in order to keep real the promise of “never again.” That is how we prevent future genocides. Remembering the victims, heroes, and lessons of the Holocaust is particularly important today as Holocaust deniers and minimizers are growing louder in our public discourse. But the facts are not up for question, and each of us must remain vigilant and speak out against the resurgent tide of anti-Semitism, and other forms of bigotry and intolerance, here at home and around the world.

The horrors we saw and heard in Charlottesville in 2017, with white nationalists and neo-Nazis spewing the same anti-Semitic bile we heard in the 1930s in Europe, are the reason I ran for president. Today, I recommit to the simple truth that preventing future genocides remains both our moral duty and a matter of national and global importance.

The Holocaust was no accident of history. It occurred because too many governments cold-bloodedly adopted and implemented hate-fueled laws, policies, and practices to vilify and dehumanize entire groups of people, and too many individuals stood by silently. Silence is complicity. As my late friend and Holocaust survivor Tom Lantos so frequently reminded us: “The veneer of civilization is paper thin. We are its guardians, and we can never rest.”

When hatred goes unchecked, and when the checks and balances in government and society that protect fundamental freedoms are lost, violence and mass atrocities can result. The United States will continue to champion justice for Holocaust survivors and their heirs. We are committed to helping build a world in which the lessons of the Holocaust are taught and in which all human lives are valued.

I always find in this Remembrance Day a somber and quiet pre-Lenten call to repentance.  The photo above from the Hall of names at Yad Vashem in Jerusalem does not do justice to the vast space of that room, and the vast emptiness that a visitor to World Holocaust Remembrance Center carries away from their visit.  “Never forget,” Elie Wiesel wrote.  For those who forget are doomed to repeat their past.

It remains a privilege to serve as one of your pasto