Please know the invitation to join the people of Trinity in Lenten Midweek Worship, the service of Compline, Prayer at the Close of the Day.  You can access the recording of this Wednesday’s service here:

The March 10 service is a recording available on Trinity’s YouTube channel and can be accessed at your convenience for a midweek worship experience during Lent of 2021.  Larry Biser offers meditative piano music to open and close the liturgy and Pastor Dan offers brief homilies in different community settings over the course of this five-week worship series.  I have the privilege of serving as liturgist for our offerings of Compline in 2021.

Come, O people of God, come and let us worship.

“I always tole God, ‘I’m gwine [going] to hole stiddy on you, 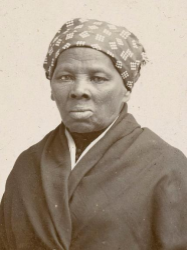 Straddling Black History Month in February and Women’s History Month in March, we remember American abolitionist and political activist Harriet Tubman.  Today, March 10, is the day Harriet Tubman died in 1913. Her birth year is uncertain, but it was likely about 1820. As a 15-year-old, after refusing to help an enslaver restrain a runaway, Harriet was struck in the head, knocked unconscious, and left for days. After her recovery, she suffered from seizures, dizziness, and hypersomnia — and at the same time began to have prophetic visions and dreams, which she interpreted as communication from God.

In 1849, Harriet Tubman escaped from enslavement in Maryland and made her way to Philadelphia. She then returned repeatedly to rescue members of her family and dozens of others, one small group at a time, traveling by night from safehouse to safehouse along the Underground Railroad. After the Fugitive Slave Act was passed in 1850, she helped guide people even farther north into Canada. She became known as “Moses,” and is said to have accompanied hundreds of people from enslavement to freedom as the most famous ‘conductor’ on the Underground Railroad.

Harriet Tubman also served in the Civil War as a scout and spy. After the war, she began taking in orphans, the infirm, and the elderly. She bought land near her home in 1903 and opened the Harriet Tubman Home for the Aged and Indigent — where she herself died ten years later.

Frederick Douglass wrote to her in 1868: “Most that I have done and suffered in the service of our cause has been in public, and I have received much encouragement at every step of the way. You, on the other hand, have labored in a private way. I have wrought in the day — you in the night . . . The midnight sky and the silent stars have been the witnesses of your devotion to freedom and of your heroism.”

Various initiatives have proposed Harriet Tubman’s image on the United States $20 bill.  That development is likely in the years ahead.

On this Lenten Wednesday, let us remember all who struggle for freedom and plant seeds of hope.  For those of us who know of slavery from history books and who have had the privilege of lives blessed by opportunities and material wealth, let us remember that there are still many people who share our generation of the human journey without such privilege.  Encountering the courage, faith and sacrificial love of Harriet Tubman can inspire us to determine ways that we can serve as ‘conductors’ of hope and dignity in our time.

Blessings to you, O people of Trinity.  I hope that our offerings of Compline on the Wednesdays of Lent in 2021 provide a measure of meaningful devotion on your Lenten journey.  May you be safe, may you be well, and may you be held in love.