Seeking a Deeper Impulse for Forgiveness 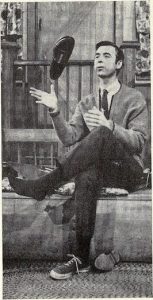 Fred Rogers was the creator and host of the wonderful preschool television series “Mister Rogers’ Neighborhood” which ran from 1968 to 2001.  An ordained Presbyterian minister, Rogers’ ministry took an unconventional form, and his congregation, even after his death in 2003, remains vibrant in sharing his proclamation of the good news.  Mr. Rogers’ inspired teaching, designed for young children, often shared a profound wisdom for their parents and other adults who accompanied them.

It is late winter (again) in a year of pandemic, and all of us could use a deeper impulse for forgiveness as we seek to care well for one another in this long pilgrimage.  In that spirit, the following little forgiveness story is a gift from Mr. Rogers for all of us:

So many people have asked me, “Do you ever get mad?”

Of course, I answer, “Well yes! Everyone gets mad sometimes.”

He did as I told him, said he was sorry, and looked very sad. The more I thought about it, the sadder I got. I realized that Alexander had not squirted me, and that I had stepped into his and his brother’s play, with a lot of feelings left over from work.

So, when I got home, I just called Alexander on the phone. I told him I felt awful about my visit with him. And the more I thought about it, the more I realized that I was taking out my anger from work on him. I told him I was really sorry.

Do you know how he answered me? He said, “Oh Bubba (he calls me Bubba), Oh Bubba, everybody makes mistakes sometimes.”

I nearly cried. I was so touched by his naturally generous heart. And I realized that if I hadn’t called him, I might not have ever received that wonderful gift of Alexander’s sweet forgiveness.

A few more nuggets of the simple but profound wisdom of Fred Rogers:

Forgiveness is a strange thing.  It can sometimes be easier to forgive our enemies than our friends.  It can be hardest of all to forgive people we love.  Like all of life’s important coping skills, the ability to forgive and the capacity to let go of resentments most likely take root very early in our lives.

There’s a part of all of us that longs to know that even what’s weakest about us is still redeemable and can ultimately count for something good.

Imagine what our real neighborhoods would be like if each of us offered, as a matter of course, just one kind word to another person. 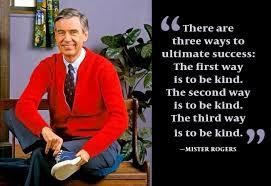 Fred Rogers received the Presidential Medal of Freedom in 2002 and a Lifetime Achievement Emmy in 1997. He was inducted into the Television Hall of Fame in 1999. Rogers influenced many writers and producers of children’s television shows, and his broadcasts have served as a source of comfort during tragic events, even after his death.

I will always be grateful for the kind, loving alternative that Fred Rogers provided for my children when the television was on in our home.  I am still impressed with that kind, loving voice , a unique ministry, that continues to touch our lives.