I hope that you will allow me one more rumination on “labor” to conclude this week’s commemoration of Labor Day.

It was after the spring semester of my first year at the seminary on Chicago’s southside that I packed up my ’71 Impala for the drive to Bismarck, North Dakota.  I was to spend the summer as a student chaplain, completing my unit of “Clinical Pastoral Education” at the Bismarck Medical Center.  I had imagined that summer as an exotic getaway to a faraway realm of Stetson hats, the Mandan Rodeo and the Lakota Sioux First People, a strange and remote locale for a kid who grew up in Gary, Indiana.

The chaplaincy was important on my journey to parish ministry, but central North Dakota proved not to be all that exotic.  There were probably more Lutherans per capita in North Dakota than anywhere else in the country but, although many of them did wear their Stetsons and Baileys, most weren’t remarkably mysterious or unusual.  I did, however, link up my summer sojourn with the Benedictines.

Two of my fellow student chaplains were David and Ray, a couple of Benedictine brothers.  Early in our time together that summer, they announced that they were going to spend the weekend at Assumption Abbey, a Benedictine monastery about an hour’s drive west of Bismarck in Richardton, North Dakota.  They invited their new Protestant friends to join them, and our cohort of five made retreat to the abbey.

After meeting the Abbot, the Guest Master brought us to the guest house on the abbey grounds, and I noted a Latin phrase etched over the doorway.  Ora et labora it read: “pray and work (labor).”  A spiritual practice specified in the Rule of St. Benedict, ora et labora had been a guiding principle for Catholic monastic practice for 1500 years. 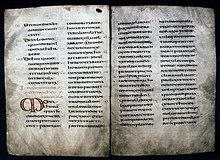 In his book of precepts written in 516, Benedict of Nursia set forth a way of monastic life, known to us as the Rule of St. Benedict.  He viewed prayer and work as fitting partners and believed in combining prayerful contemplation with an active life.  The balance of prayer and work, ora et labora, became a foundational practice of monastic life in the Benedictine model.

During the summer of my North Dakota sojourn, I spent four weekends with the Benedictine monks at Assumption Abbey.  Refraining from paying for a guest room at the abbey, most often I pitched a tent down the hill by a little lake on the property.  And I began to join the abbey monks in offering the daily prayer offices, hiking up the hill to the Abbey Church for that discipline.  One weekend I completed all the appointed prayers, the Liturgy of the Hours, including traditional Matins at 2 a.m.  I was not familiar with the liturgies that were prayed, although I recognized some similarities to the Lutheran versions of Matins, Vespers and Compline.  Still, I found myself easily at prayer among the monks who gathered for their “ora” discipline.  In the quiet of the Abbey Church my prayer life was enlarged by those weekends engaged with the Benedictine monastic community.

give thanks in all circumstances;

for this is the will of God in Christ Jesus for you.

Do not worry about anything, but in everything by prayer and supplication with thanksgiving

let your requests be made known to God.

And the peace of God,

which surpasses all understanding,

will guard your hearts and your minds

Pray without ceasing.  Let your requests be made known to God.  In recent years a kind phrase of compassion in community has been critiqued by those who have suffered deeply.  “I will keep you in my thoughts and prayers,” we say to the one who has known great loss.  But victims of school shootings, racial killings, addiction, terminal illness and even natural disasters have replied, “I need more than your thoughts and prayers.”  Prayers come up short in responding to the tragedies that beset our neighbors on life’s journey.  Good thoughts are not enough.

Ora et labora, prayer and work.  People of faith have the opportunity to reclaim Benedict’s order, that balance of joining prayerful contemplation with an active life.  We are indeed to pray unceasingly in this world of ours, but we also need to join hands and work for the better society in which we hope to live, even when we feel ill-equipped to bring about the change for which we pray or powerless before the scope of the work to be done.

Slowly I have realized that I do not have to be qualified to do what I am asked to do.

That I just have to go ahead and do it, even though I can’t do it as well

as I think it ought to be done.

This is one of the most liberating lessons of my life.

I long to accomplish a great and noble task, but it is my chief duty

to accomplish small tasks as if they were great and noble.

One is not born into the world to do everything but to do something.

Do your little bit of good where you are;

it’s those little bits of good put together

that overwhelm the world.

Blessings to you, O people of Trinity.  Called to join our lives at prayer with our lives seeking to do the good we can do, our work, I am thankful that we can labor in the vineyard together.