More than heroes and villains, for all fall short of our calling . . .

Yesterday’s Gospel lesson from Matthew, the parable of the tenants in the vineyard, tends to evoke an initial response that is polarizing.

In Matthew’s account, it was the second day of Jesus’ ‘occupation’ of the Temple in Jerusalem after his Palm Sunday entrance into the city.  The religious leaders were questioning Jesus.  “By what authority are you doing these things?”  They hoped to entrap Jesus in a moment of blasphemy so that they could arrest him and be done with this meddlesome Nazorean.  Jesus responded to their attempts to trap him with a series of parables, including the parable of the tenants, and those same religious authorities became the subject of what some Bible scholars call a ‘parabolic trap.’  They were critiqued and revealed as lacking, trapped by their own response to the teaching story, the parable, that Jesus told. 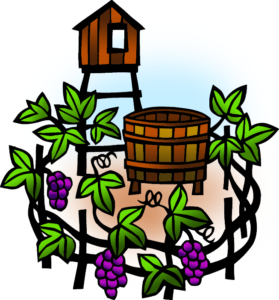 According to the parable, when harvest time came the owner of the vineyard sent servants to collect his share of the harvested produce from the vineyard’s tenants.  The tenants not only failed to return the owner’s share to the owner, they abused his servants and finally even killed the vineyard owner’s son:

38But when the tenants saw the son, they said to themselves, ‘This is the heir; come, let us kill him and get his inheritance.’ 39So they seized him, threw him out of the vineyard, and killed him.

40 “Now when the owner of the vineyard comes, what will he do to those tenants?” 41  [The religious authorities] said to [Jesus], “He will put those wretches to a miserable death, and lease the vineyard to other tenants who will give him the produce at the harvest time.”

Jesus replied to the religious authorities by saying, in effect, you are those wretches.  You are the ones who have failed to live up to your calling as stewards of the mysteries of our faith.  Your stewardship of the vineyard has failed to meet your obligations.

43Therefore I tell you, the kingdom of God will be taken away from you

and given to a people that produces the fruits of the kingdom.

Jesus’ parables stirred people up, provoking questions, doubts, even hostility. When his listeners recognized themselves in the parables, it was rarely comforting or affirming. As latter-day hearers of these parables, do we have the honesty and vulnerability to see ourselves critically in the stories as the chief priests and Pharisees did?

It is important to note that there aren’t any clear heroes in this story, as in any story of class warfare. Perhaps the tenants turned to violence out of frustration with the economic injustice of their situation. The Pharisees were quick to side with the powerful landowner, asserting his right to kill the tenants and crush their revolt, yet Jesus does not affirm this escalation either.

A simplistic, polarized view of the Gospels might characterize the Pharisees, chief priests and other ‘religious authorities’ as the villains in the overarching Gospel story, with the disciples and other followers of Jesus as the heroes.  However, those religious authorities were likely seeking the sanctity of the law of the God of Moses with sincerity, and among the closest of disciples were those who denied and betrayed their Lord.  The ‘heroes and villains’ dualism falls short.

Frequently the Bible depicts the failings and shortcomings of its heroic figures. The Bible recounts not just David’s triumph over Goliath and his psalms of praise, but also his murder of Uriah the Hittite. Readers learn both of King Josiah’s religious reforms and the ill-advised battle he waged against Egypt. Readers are told that Abraham and Isaac lied about their wives, that Sarah lied about laughing at God, that Solomon committed idolatry, and that Moses disobeyed God’s command by striking a rock in anger. Some of these passages are strange; indeed, it seems at times as if the authors and compilers of the Bible went out of their way to include stories of heroes’ flaws and misdeeds.

This thread within the Hebrew Bible challenges readers’ reliance on historical dualism, on categories of heroes and villains. The retelling of these stories does not mean readers were being taught to hate their founding figures, nor does it do away with the need to look to the past for moral guidance. Instead, these passages remind readers that every human being is an ambivalent and complex creature, and that praiseworthy actions do not absolve one from blame. Only a people capable of telling stories like these about their past as a people will be capable of wrestling honestly with their own failings.

This is important.  Jesus did not wish upon his detractors among the religious authorities that “those wretches be put to a miserable death.”  Those were the words of the religious authorities in response to his parable.  Jesus did not name his adversaries as villains and thereby create a simplistic dualism by which to order the world.  Rather, Jesus wished that they might hear the Word of God and reorient their lives to be keepers of that Word.  He wished that they might repent, turn around, produce the fruit of the Kingdom and care well for the responsibilities that had been entrusted to them.

At this time in our nation’s history, our tendency to categorize leaders and the standard bearers of political parties as heroes and villains is particularly grievous.  We are a deeply divided, polarized people.  Perhaps we could use more of the rite of Confession and Forgiveness that begins our worship in our day-to-day assessment of our political climate and our encounter with one another in this election season.  But that is for my writing on another day . . .