“From Black and White to Shades of Gray,” and Bonhoeffer on “costly grace” and the cost of discipleship

It was after visiting the Church of the Nativity in Bethlehem, the traditional site of Jesus’ birth, that our Palestinian guide Noor A’wad took us down the alleys of the city to a modest meeting room used by Roots/Shorashim/Judur, a local Palestinian Israeli initiative for understanding, nonviolence and transformation.  Noor was much more than a tour guide.  A significant aspect of his life’s work had been serving as a Palestinian Roots activist, and we spent a couple of hours in dialogue with he and Roots co-founder Rabbi Hanan Schlesinger, an Israeli settler.  At the heart of their dialogue that day was advocating for the simple act of meeting and recognizing ‘the other.’  Despite their ideological differences, the Palestinian and Israeli participants in the Roots/Shorashim/Judur network were seeking to develop understanding and solidarity, challenging the assumptions their communities held about each other, and creating a new discourse around the conflict in their respective societies.  Recognizing the need to see each other as partners in order to make the changes necessary to end their conflict, they represented a grassroots and local movement for making such change ‘from the bottom up.’

Our tour group was an interfaith delegation of Jewish, Muslim and Christian clergy.  Although the conversation with Noor and Hanan was inspiring, it was clear that the work ahead to actualize peace among Palestinians and Israelis was daunting.  The path forward would not be ‘black and white’ in its aspirations, but clearly resided in the more complex gray areas of building trust and understanding and recognizing ‘the other.’  Embracing the mantra of Rabbi Izzy Zoberman, a member of our interfaith delegation and a former resident of Haifa in Israel, we would often conclude our discussions and deliberations with the phrase, “It’s complicated.” 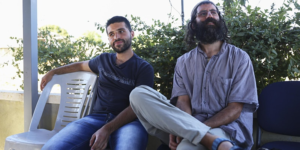 Last Sunday, I had a chance to hear Noor A’wad in conversation again.  He and Shaul Judelman, the Israeli co-director of Roots, presented a Zoom conference entitled “From Black and White to Shades of Gray.”   They described the devastating and ultimately life-expanding experience of meeting ‘the other’ in the full force of his particular identity.  They indicated that Palestinians and Israelis live largely in a state of mind in which the other side is simply invisible, denying each other and staking their identities on the dismissal of the other’s identity.  Shaul and Noor shared the cognitive dissonance, confusion, and disorientation created when they first met ‘the other side,’ and the psychological process initiated in the wake of deep, continuous dialogue.

Again, after 90 minutes of Zoom conferencing, an international group of participants departed Sunday afternoon without answers or a clear path forward.  But we were intentionally invited into the ‘gray areas’ of dialogue, recognizing that the hard work of progress would occur in the context of difficult engagement.

The topic of my Sunday afternoon immersion was to provoke consideration of hope-filled possibilities regarding the Palestinian/Israeli conflict in Israel and the West Bank.  But I am compelled to share this little experience today in the context of our deeply polarized society and political climate.  Our tendency in the divisive climate in which we reside is to take sides, to view every action related to the crises of pandemic, economic stress and societal upheaval by lining up with a philosophical, ideological or political ‘side.’  We are resigned to perceiving issues as black and white, which means that one must choose either black or white and hold to that position in defiance of ‘the other.’  Such side-taking does not require much genuine dialogue or engagement.

I am convinced that simply choosing a side when confronting complex topics is the easy and dismissive way to avoid the hard work of building consensus and growing in understanding.    The hard work to which we are called is not to give in to choosing a side when complex issues are framed as ‘black and white,’ but to enter the gray areas of complex issues to more fully understand ‘the other.’  Much significant progress in the human experiment, in the sciences, in research and development, and in governmental, ecclesial and societal change occurs when we choose not to adhere to polarizing absolutes but to engage the other side with a desire for new discovery, understanding and transformation.  When wrestling with complex issues, that is a choice to progress “from black and white to shades of gray.”  It is a choice to follow a hard road for the sake of coming to new and meaningful resolution. 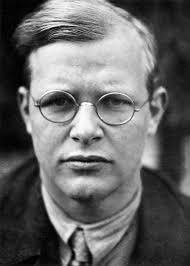 Dietrich Bonhoeffer was a Lutheran pastor, theologian, resister, spy and finally a martyr in World War II Germany.  He was executed for being part of a plot to overthrow the Nazi regime in July of 1944.  Bonhoeffer characterized the choice to embrace the hard road and a worldview that enters the gray areas in his writing on grace and discipleship.

Bonhoeffer wrote that the ultimate test of a moral society is the kind of world it leaves to its children.  For the faith community, one of his most pivotal writings was on the ‘cost of discipleship,’ and in that context he contrasted “costly grace” from “cheap grace” for the follower of Jesus.

To some degree, I find that Bonhoeffer’s image of “costly grace” has parallels to engaging complex issues in the ‘shades of gray,’ embracing the hard work that transformation requires.  “Cheap grace” can evoke our tendency to not work at that transformation, to simply settle for a clear-cut answer and outcome, and defer to aligning ourselves with a side by nurturing a perception that complex issues are in actuality ‘black and white.’  For the disciple, costly grace and the cost of discipleship, rooted in the cross of Christ, commands a deeper engagement.

Cheap grace is the preaching of forgiveness without requiring repentance, baptism without church discipline, Communion without confession, absolution without personal confession. Cheap grace is grace without discipleship, grace without the cross, grace without Jesus Christ living and incarnate. Costly grace is the treasure hidden in the field; for the sake of it a man will gladly go and sell all that he has. It is the pearl of great price to buy which the merchant will sell all he his goods. It is the kingly rule of Christ, for whose sake a man will pluck out the eye which causes him to stumble, it is the call of Jesus Christ at which the disciple leaves his nets and follows him. Costly grace is the gospel which must be sought again and again, the gift which must be asked for, the door at which a man must knock. Such grace is costly because it calls us to follow, and it is grace because it calls us to follow Jesus Christ. It is costly because it costs a man his life, and it is grace because it gives a man the only true life. It is costly because it condemns sin, and grace because it justifies the sinner. Above all, it is costly because it cost God the life of his Son: “ye were bought at a price,” and what has cost God much cannot be cheap for us. Above all, it is grace because God did not reckon his Son too dear a price to pay for our life, but delivered him up for us. Costly grace is the Incarnation of God.

from The Cost of Discipleship by Dietrich Bonhoeffer (NY: MacMillan, 1963)

“Costly grace is the gospel which must be sought again and again, the gift which must be asked for, the door at which [one] must knock.”

We can’t just choose a side.  Friends in Christ, our polarized, divisive time seems to call upon us to make decisions which are black and white, to take sides and to claim a tribe.  Consider the inspiration to enter the ‘shades of gray’ and, in so doing, to listen to and seek to understand your adversary, perhaps discovering that you share an unexpected commonality with ‘the other.’   It is a more costly choice, one that requires hard work, vulnerability and openness to change.  Our world could use a few more of us willing to reside in the gray areas of our conflict, developing new levels of discourse and hearts for transformation.